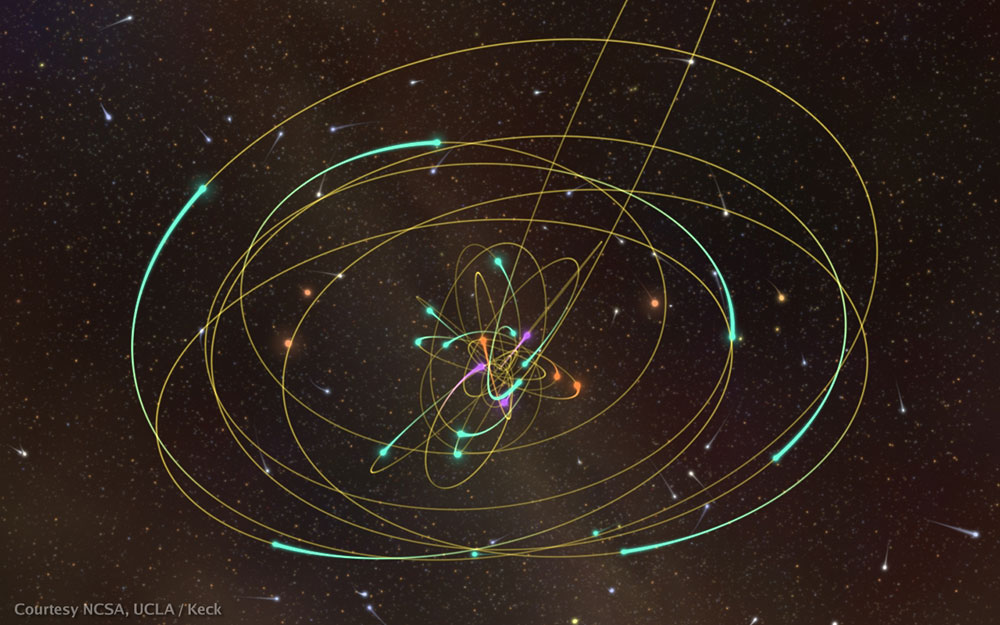 Shown here are 39 stars which Andrea Ghez's group has actually observed in motion over time. For 22 of those, where they were able to determine the orbit with confidence, the orbit curve is shown in yellow.

Those 39 real stars are drawn here in garish, wildly unrealistic colors. For most of those stars, they were able to estimate their rough spectral type, which is related to the star's temperature and color. "Early type" stars (hot stars which might look blue-white or white in real life, if we could see them in visible light) are drawn in teal green. "Late type" stars (cooler ones which might be yellowish or reddish in visible light) are burnt orange here. A few stars of unknown spectral type are shown in magenta.

The trails behind each star span about 15-20 years' motion for most of them (except for those with short-period orbits, where it's at most a fifth of the orbit).

There are many more stars near the center of the Milky Way which haven' been observed in such detail. To suggest how they might be arranged in space, Sylvana Yelda also created synthetic sets of stars, with distributions chosen to resemble what is seen on the sky. Those are shown differently – with colors to suggest their "early" (whitish) or "late" (yellow-to-orange) spectral type, but not the garish colors used for the real, observed stars. They also are drawn with trails.

Finally, there are stars in NCSA's model of the inner part of the Milky Way which you can see in the distance. They have a variety of colors, from blue-white to yellow-orange, but are drawn without trails. They're made to be less apparent so that the Ghez group's stars can take center stage.

This movie is copyrighted by the University of Illinois and is available for academic and educational purposes only. Credits integrated within the movie are required for its use. 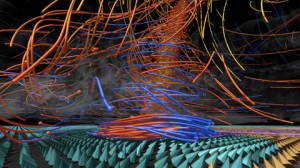 Scientists used pre-storm conditions from an observed F4 tornado in South Dakota in 2003 to initialize a simulation that produces a severe supercell storm that produces a powerful tornado and terabytes of data.

Data driven visualization components reveal the inner-workings of the simulation. Interactively filtered streamtubes colored orange when rising and blue when sinking represent the path of air through the storm. A swirling mass of red spheres in the low pressure tornado vortex delineates the developing tornado.

On the ground plane, tilting cones represent wind speed and direction. Colored by temperature, they show a surface boundary where warm and cold air interact at the tornado's base.

Nonlinear Evolution of the Universe: from 20 million to 14 billion years old 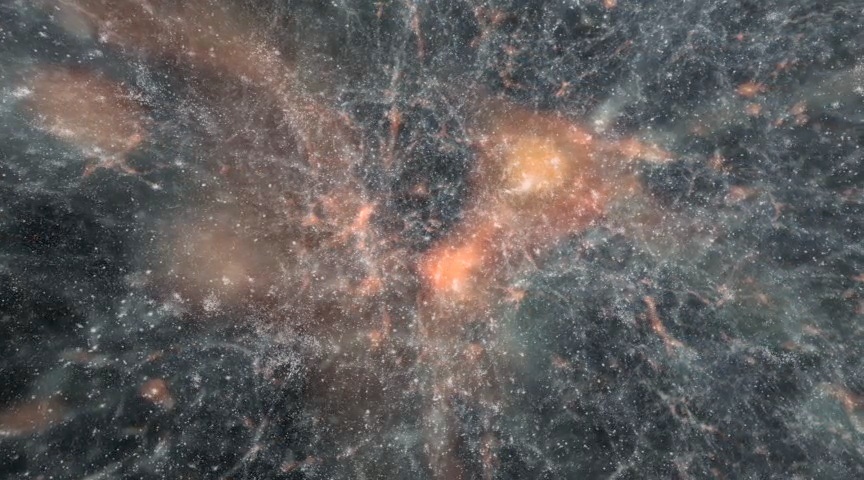 The cosmological simulation computes the nonlinear evolution of the universe in the context of the standard cosmological model determined by the Wilkinson Microwave Background Anisotropy experiment. The simulation has the highest (mass) resolution of all simulations of this type computed in 2005-6 with detailed physics treated in a large cosmological volume which is necessary to form for example clusters of galaxies. Small volume simulations do not generate this level of galaxy clusters. 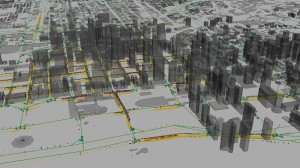 A visualization of microsimulator data generated from the TRANSIMS Chicago example simulation. The image was produced using NCSA’s data visualization plug-in for Maya, which was developed by AVL’s Alex Betts. Vehicle paths from the microsimulator were converted to a trajectory representation and then read into Maya, which was used to create the graphic representation. Building data have also been modeled and added to the simulation.