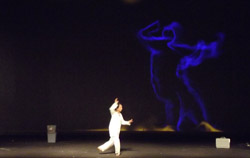 AVL and eDream work with Krannert Center for “Tao of Bach”

Chungliang Al Huang practices his performance for the show "The Tao of Bach."
(photo by Bob Patterson)

Donna Cox, director of the Illinois Emerging Digital Research and Education in Arts Media Institute (eDream) and the Advanced Visualization Laboratory (AVL) at NCSA, stood center stage and thrust her right hand out from her shoulder a few times. "I'm still not getting the chi out of my hand," says Cox. "Hey Alex, can you turn up the chi?"

The eDream and AVL teams spent the morning of August 27 collaborating with staff at the Krannert Center for the Performing Arts and calibrating the visualization software to Krannert Center's projectors for "The Tao of Bach," a multimedia, dance, and music performance. The team was rehearsing the settings that control the visual flow of body motion produced on the screen.

Alex Betts, AVL 3D graphics visualization software designer, adjusted a few of the settings on a computer in the left wing of the stage and the chi flowed.

Tammey Kikta, Krannert Center's assistant director for artistic services, says that eDream has really embraced the spirit of Taoism for this project.

A pre-show movie sets the mood with computer-generated yin-yang galaxies that segue to calligraphy. Real-life nature shots near the Living Tao Foundation in Oregon subtly highlight eDream and AVL's attention to detail when the coastlines in adjacent shots fit together almost like puzzle pieces.

"We shot high-resolution time-lapse and digital cinema of nature to be used in the performance," says Bob Patterson, eDream associate director for production and AVL visualization research artist.

Jeff Carpenter, a multimedia specialist with eDream, designed and edited of most of the video and calligraphy segments for the performance. He and Patterson worked together to create the mesmerizing, digitally affected movies that will be projected on multiple screens before and throughout the performance.

Once the main attraction begins, eDream and AVL staff will play an active role in the show. A Kinect camera captures performers who are within "the cone," the term used for the wedge-shaped viewing area of the camera. Microsoft originally manufactured the Kinect camera to allow users to play Xbox 360 and Windows PC video games using body movements and voice commands. A wire strung across the front of the stage carries the image to two off-stage computers.

Betts will sit at the computers during the show and run a program he developed called CHI-vision that transmutes the image and projects what looks like a silhouette in brightly colored fluid on the screen upstage. The fluid represents chi, or life energy. A multitude of numerical settings in a simple graphical user interface control the qualities of the on-screen aura.

"This work has called upon the breadth of talent in the AVL group," says Cox, from astrophysical visualization and Patterson's digital cinema that make up the pre-show to animated calligraphy and CHI-vision, which will be run interactively in real time during the performance.

Chungliang Al Huang, Tai Ji master and founder of the Living Tao Foundation, is the dance star of the show. He and his wife, Suzanne Pierce, were the first artists-in-residence at Krannert Center in 1969. Krannert Center's director, Mike Ross, started talking to Huang about a collaborative project three years ago, says Kikta.

"What I want to see is a marriage between visual and music," says Huang.

Four world-renown musicians—cellists David Darling and Michael Fitzpatrick, harpist Ann Yeung, and flutist Alexander Murray—will join forces for a single performance at Huang's invitation. Huang refers to himself and the musicians as a quintet.

"It's a once in a lifetime chance," he says.

eDream joined in about a year ago, says Cox, and solidified plans last spring. NCSA and Krannert Center have collaborated on sundry projects for nearly two decades.

"We have a good working relationship with Krannert [Center] and visiting artists," says Carpenter.

Cox took a particular interest in the project after a Memorial Day workshop with Huang. The healing aspect of Tai Ji helped her recover from a recent surgery, says Cox.

Huang is a great collaborator, she says, and provides a lot of creative input and inspiration. She says she has been more involved in this project than usual, especially with design and providing feedback.

Go with the flow

After the pre-show film, the performance starts cool and calm with Bach's "Air on the G String" and heats up as the fervor builds toward a portion called "Tai Ji Boogie."

"This is really the most fun because we're improvising like mad," Huang says.

The mood ebbs and flows from serene to spirited and back. The musicians reprise "Air on the G String" to bring the concert to a circular close.

Cox promises a surprise at the end of the performance.

"There are so many ingredients that make this a unique event. Not to be missed, as they say." Huang says with a chuckle.

"Hopefully the audience will dance out into the lobby and dance home."

"The Tao of Bach" comes to Tryon Festival Theatre at the Krannert Center for the Performing Arts on September 13 at 7:30 p.m.