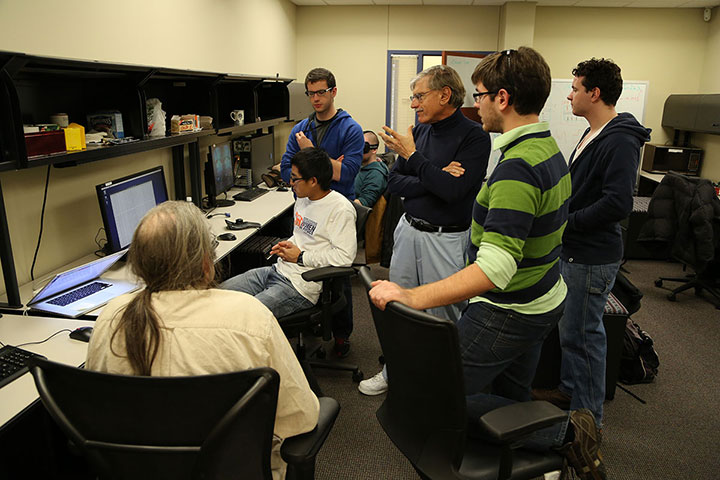 SPIN Fellows present their work on May 1

Students participating in the 2013 spring semester’s SPIN Fellows program at NCSA presented a brief summary of their work. These 10-minute presentations took place on May 1 from 3:30-5:30 p.m. in NCSA 1040.

Jerry Fiddler, U of I alum, supporter of eDream, and principal of Zygote Ventures, has helped create and grow a number of companies, as CEO, director, chairman, investor, and advisor and gave a talk during NCSA's SPIN inaugural event at 4:30 p.m. in the NCSA Auditorium on Oct. 24. Mr. Fiddler discussed his philosophies on innovation and shared his experiences as an interdisciplinary student.

Mr. Fiddler is the founder of Wind River and was CEO and Chairman for 23 years. After its establishment in 1981 in Fiddler's Berkeley garage, Wind River grew to become the leading provider of device software worldwide, with over $400M in annual sales, and market cap well over $1B. He is now the Chairman of Solazyme, a biotech company working with algae for energy, industrial, and health applications. Solazyme is the first company in the world able to make production quantities of biodiesel and other algal oil products.

NCSA is looking for Illinois undergraduate students who have big ideas and the creativity, skill, and drive needed to bring them to life. We're offering up to 15 paid innovation fellowships—selected students will work with NCSA mentors during the Spring 2013 semester.

After the SPIN open house, submit your personal fellowship proposal. Selected students will be given office space and support to develop their ideas in collaboration with their NCSA mentors.

Additional opportunities may also be available with NCSA and the Blue Waters project, the Illinois Informatics Institute, eDream, and the Illinois Institute for Computing in Humanities, Arts, and Social Science.