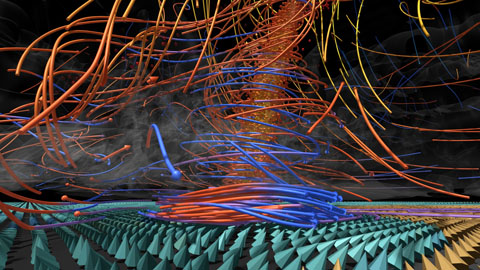 AVL has contributed interactive visualizations to the Chicago Museum of Science and Industry's new 26,000 square foot Science Storms wing, which will open in April 2010. The visualizations are housed in a free-standing kiosk in the tornado science area of the $10m renovated site. The area will attract visitors to a 40-foot tall tornado and then lead visitors through a hemisphere of other exhibits, including the kiosk.

The kiosk engages visitors with two visualizations: one asks visitors to choose between a series of forecast conditions that can lead to a tornado's formation and another enables visitors to turn different features of a tornado's "anatomy" on and off in order to give them a better view of its computationally-rendered elements and how they relate to one another.

The installation AVL has created will educate the public not only about the science of tornadoes, but also about the value of supercomputing-empowered science: processing quadrillions of calculations per minute and rendering complex models and simulations of science hypotheses for further inquiry.

AVL's interactive visualizations for the exhibit are based on the lab's famous tornado visualization, which was featured in NOVA PBS Hunt for the Supertwister (2004). New thinking and design were contributed through our collaboration with atmospheric scientists Bob Wilhelmson, Glen Romine, and Brian Jewett from the University of Illinois; educators Rachael Hellenga and Olivia Castellini of MSI; and museum media producer Cathryn Buchanan of Cortina Productions (McLean, VA).