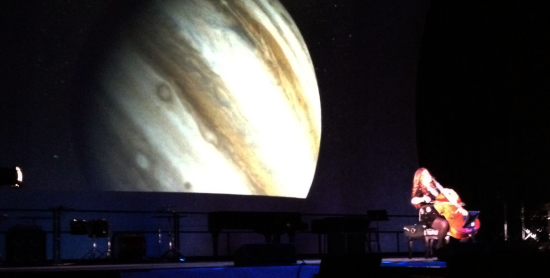 “Just Ancient Loops” premieres at Bang on a Can Festival

AVL collaborated with multi-media artist and filmmaker Bill Morrison to create a Jovian moon visualization for his latest project "Just Ancient Loops".  The visualization is based on Walter Murch's analysis of Jupiter and it's Galilean moon orbits and how they relate to musical ratios. The project is a collaboration between renowned cellist Maya Beiser, composer Michael Harrison and  Bill Morrison.  Maya Beiser performed live in front of the film projection, which premiered June 17th @ 9pm during Bang on a Can’s Marathon

"Just Ancient Loops is a 25-minute piece that unveils every aspect of the cello – from its most glorious and mysterious harmonics to earthy, rhythmic pizzicatos. In this work the cello becomes this “über” instrument – laying down the drones, building rhythmical grooves on top of each other, singing melismatic melodies, and reaching up to the stratosphere as the music evolves and builds into a massive, exhilarating climax. Michael Harrison explains, 'Just Ancient Loops uses Just tunings, Ancient modes and harmonies, and Loops of melodic and rhythmic modules. It is a musical odyssey for an orchestra of cellos, with each cello part recorded separately in the studio by Maya. In concert Maya plays the lead part live accompanied by a recording of all of the other prerecorded parts and a new film created specifically for the project by multi-media artist Bill Morrison.'" --- courtesy Maya Beiser

AVL formerly collaborated with Bill Morrison on a visual scene for the Great Flood project.